Al-Manar – Hezbollah Secretary General Sayyed Hasan Nasrallah on Sunday hit back at those who criticize the Lebanese party over its relation with Iran, saying that Lebanon “exists on the map” thanks to the Resistance which is backed by the Islamic Republic.

Sayyed Nasrallah stressed the importance of being loyal to the blood of the commander of IRGC’s Quds Force General Qassem Suleimani and the Deputy Head of Iraq’s Hashd Shaabi Abu Mahdi Al-Muhandis.

His eminence was talking in a speech on the occasion of first martyrdom anniversary of Gen. Suleimani and Al-Muhandis who were assassinated last year by a US strike on Baghdad International Airport.

Sayyed Nasrallah highlighted that the support by Iran has been unconditional, noting that the Resistance can’t put those who provided it with money and weapons and those who plot against the country on the same level.

Iran is not weak, and it knows very well when and how it will avenge the assassination of its figures, the Resistance leader said. Sayyed Nasrallah stressed, meanwhile, that the Resistance gets more firm and stubborn following the assassination of its leaders. His eminence insisted that the US policies of sanctions and economic blockade are fruitful.

Sayyed Nasrallah started the speech by describing the assassination of Gen. Suleimani and Al-Muhandis as a “tragedy that will immortalize with its significance and repercussions on the entire region.”

He insisted that loyalty is one of the main factors of victory and steadfastness against the enemies’ schemes, noting that loyalty to the blood of martyrs Suleimani and Al-Muhandis “requires us to thank and praise these great leaders.”

“Shortly after the crime was committed last year, people across the Axis of Resistance, especially in Iran and Iraq, took to streets to voice their gratitude to the martyrs. Perhaps the funeral of Suleimani and Al-Muhandis was the greatest one in the history of the mankind.”

“Iran and Imam Khomeini stood by the Resistance in Lebanon and Syria since the first day of the Israeli occupation of Lebanon,” Sayyed Nasrallah said referring to the founder of the Islamic Republic Imam Ruhullah Khomeini. “When we thank Iran, this is out of loyalty to those who backed and supported us to liberate our country,” his eminence added.

Stressing importance of loyalty to Iran, Sayyed Nasrallah lashed out at some Lebanese media outlets which he said falsified remarks by Commander of IRGC’s commander of Aerospace Force Amir-Ali Hajizadeh.

“Lebanon exists on the map thanks to Resistance and its missiles which are Iranian-made. Lebanon’s main source of pride is the Resistance,” Sayyed Nasrallah emphasized.

“We can’t put those who provided it with money and weapons and those who plot against our country on the same level. Throughout the last year the assassination crime was present in the political, military and security equations. We all know that the tensions nowadays in our region are high. The Zionist entity is on alert on the eve of the first martyrdom anniversary of the two leaders.”

Meanwhile, he lashed out at some US’ Arab allies, whom he said are unlike Iran, can’t withstand in any attack by any other state without Washington’s support.

Sayyed Nasrallah stressed that the Axis of Resistance managed to stay consistent and powerful after the blow it was dealt by the assassination of Suleimani and Al-Muhandis.

“We know very well how to change the threat into a chance. When you assassinate our leaders we get more determined and stubborn.” His eminence said described Gen. Suleimani as the ‘international icon’ who backed all oppressed people across the world without regard to their religious or political affiliation.

Sayyed Nasrallah noted that one of the main repercussions of assassination of the two commanders is the calls for US forces to pull out of the region. He revealed that he will appear later next week to tackle Lebanese issues.

Sayyed Nasrallah then concluded his speech by stressing that the US policies of assassinations and sanctions are fruitless. “Mistaken he who thinks that we can retreat by either sanctions or assassinations.” 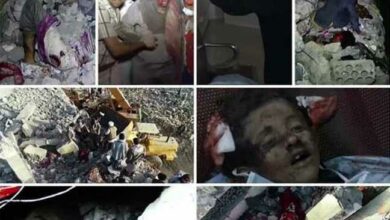