Mehr News Agency – Former US President Jimi Carter says the US has been at war for all but 16 years of its 242-year history to force others to adopt American principles. 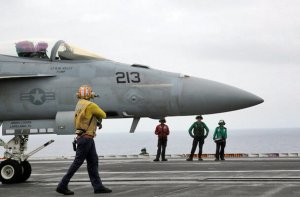 Earlier this year former President Carter sent President Trump a letter with some advice about managing the US-China relationship. Carter oversaw the normalization of diplomatic relations between the countries 40 years ago.

And on Saturday evening, Trump called Carter to talk about it. It was the first time they’d spoken, Carter said. He said Trump said the particularly concerned about how China is “getting ahead of us.” Carter agreed that’s true, according to www.wabe.org. “And do you know why? I normalized diplomatic relations with China in 1979. Since 1979 do you know how many times China has been at war with anybody? None. And we have stayed at war,” he said.

The US, Carter said, has been at war for all but 16 years of its 242-year history. He called the United States “the most warlike nation in the history of the world,” because of a tendency to try to force others to “adopt our American principles.”

Zero, the congregation answered. “We have wasted I think $3 trillion,” Carter said of American military spending. “… It’s more than you can imagine. China has not wasted a single penny on war and that’s why they’re ahead of us. In almost every way.

“And I think the difference is if you take $3 trillion and put it in American infrastructure you’d probably have $2 trillion leftover. We’d have high-speed railroad. We’d have bridges that aren’t collapsing, we’d have roads that are maintained properly. Our education system would be as good as that of say South Korea or Hong Kong.

“I wasn’t comparing my country adversely to China,” Carter qualified. “I was just pointing that out because I happened to get a phone call last night.” He said he understood that Trump is worried about China surpassing the US as the world’s top economic superpower. “I don’t really fear that time, but it bothers President Trump and I don’t know why. I’m not criticizing him — this morning,” Carter said to laughs from the audience.

Much of Carter’s Palm Sunday lesson went beyond politics, to focus on the importance of bringing virtues like peace and kindness to today’s world, and how, he said, God has given each person the freedom and the power to change their own life.

He spoke to a congregation of mostly visitors, many of whom had arrived overnight to get in line for the service. That’s become commonplace for his biweekly Sunday School lessons. Last month Carter became the nation’s longest-living president.

Elezioni in Finlandia, vincono i socialdemocratici