The terrorist “ISIL” group blew up an ancient temple in the UNESCO-listed ancient Syrian city of Palmyra, says the country’s head of antiquities. 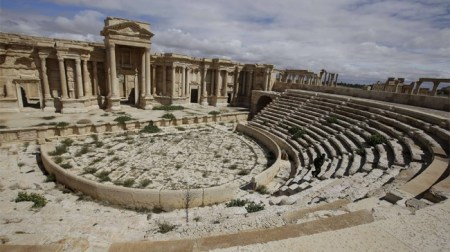 “Daesh placed a large quantity of explosives in the temple of Baal Shamin today and then blew it up causing much damage to the temple,” AFP quoted Maamoun Abdulkarim as saying on Sunday.

The militant group overran the historic city in the central Homs province on May 21. “The cella [inner area of the temple] was destroyed and the columns around collapsed,” Abdulkarim said.

The so-called Syrian Observatory for Human Rights confirmed Baal Shamin’s destruction. The temple was initially constructed in 17 AD and was extended under the sovereignty of Roman emperor Hadrian in 130 AD.

An aerial view taken on January 13, 2009 shows a part of the ancient city of Palmyra. The latest move follows the group’s beheading of Palmyra’s retired chief archaeologist, Khaled al-Assaad, on Tuesday. According to Assaad’s family, his body was mutilated after he was killed.

The terrorists have razed to the ground a number of mosques in Syria and Iraq, many of them dating back to the early years of the Islamic civilization. The terrorists have also destroyed tombs belonging to revered Shia and Sunni figures.

“ISIL” militants “carried out executions in the ancient theater [of Palmyra]; they destroyed in July the famous Lion Statue of Athena… and transformed the museum into a prison and a courtroom,” said Abdulkarim.

“Our darkest predictions are unfortunately taking place,” noted the Syrian head of antiquities.