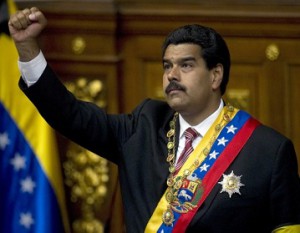 Venezuelan acting president Nicolas Maduro clenches his fist after he was sworn in as acting President, in Caracas, on March 8, 2013. Maduro took over as acting president in a ceremony rejected by the opposition after a tearful farewell to Hugo Chavez during a rousing state funeral for the firebrand leftist. AFP PHOTO/Juan Barreto