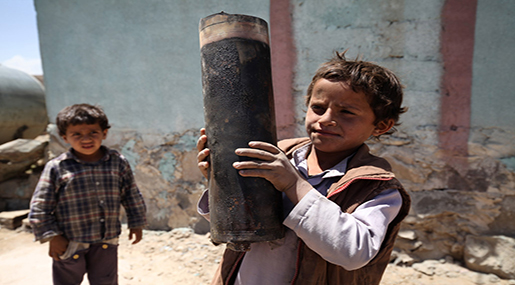 Alarmed by the dramatic increase in grave violations against Yemen’s children, the United Nations Special Representative for Children and Armed Conflict has called on all parties to respect their obligations under international law to safeguard civilians from harm, including children.

Reflecting on conflict-affected countries in the Middle East, Leila Zerrougui said in a statement issued Tuesday that Yemen has become “another stark example of how conflict in the region risks creating a lost generation of children, who are physically and psychologically scarred by their experiences, deprived of educational opportunities, and who face an uncertain future.”

“Children are paying an unacceptable price, and the ever mounting death toll tragically underscores the need for urgent action to protect them and other civilians,” said the Special Representative.

Zerrougui said she is appalled by the heavy civilian casualties in Taiz, where reportedly 34 children were killed and 12 injured over the past three days. On 21 August, Saudi-led coalition airstrikes slaughtered 65 civilians – including at least 17 children.

“Parties to conflict must abide by their international legal obligations to distinguish between civilian and military objects, and take precautions to avoid and minimize civilian casualties,” she stressed.

The Special Representative also deplored the number of attacks on schools and education personnel, and the devastating impact on children’s right to education. “As the start of a new school year approaches, the conflict is severely curtailing children’s access to education.” Zerrougui said.

UNICEF has reported that since end-March, 114 schools were destroyed and 315 partially damaged – with an additional 360 serving to shelter displaced families. Furthermore, some 3,600 schools will not reopen due to insecurity – interrupting education access for an estimated 1.8 million children.

For his part, the Under-Secretary-General for Coordination of Humanitarian Affairs Stephen O’Brien stressed that the civilian population is bearing the brunt of the conflict and warned that unless warring parties came to the negotiating table there would soon be “nothing left to fight for”.

An August assessment report by Save the Children-Yemen on the humanitarian situation in the country of 26 million noted that over 21 million people, or 80 percent of the population, require urgent relief in the form of food, fuel, medicines, sanitation and shelter.

The health sector is on the verge of collapse, and the threat of famine looms large, with an estimated 12 million people facing “critical levels of food insecurity”, the organization said.

In a sign of what O’Brien denounced as a blatant “disregard for human life” by all sides in the conflict, children have paid a heavy price for the fighting: 400 kids have lost their lives, while 600 of the estimated 22,000 wounded are children.

In a statement published shortly after the airstrikes, Edward Santiago, Save the Children’s Country Director for Yemen, said, “We don’t yet know the full extent of the damage at Hodeida but we can’t lose a day; time is running out for Yemen’s children who are already at risk of starvation, disease, and abuse.”

Meanwhile, the International Committee of the Red Cross [ICRC] said on Tuesday it had temporarily suspended its activities in the southern Yemeni port city of Aden after its office was raided by unidentified gunmen a day earlier.

The head of ICRC’s Aden operation Samer Jarjouhi said Monday’s attack on the Red Cross offices was only the latest in at least 10 such incidents.