Hezbollah Secretary General His Eminence Sayyed Hassan Nasrallah stressed on Friday the importance of having an international day in support of Al-Quds. Addressing thousands of people commemorating Al-Quds Day in Southern Lebanese border town, Maroun Al-Ras, Sayyed Nasrallah highlighted that “the goal of late Imam Khomeini was to keep Al-Quds in the conscience of the nation and that people all over the world stand in solidarity with it.” 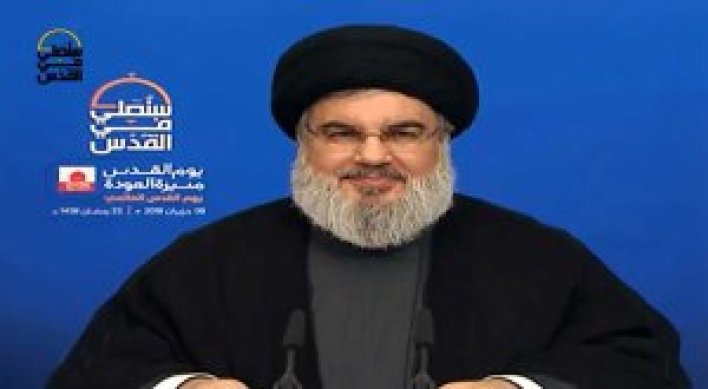 “Al-Quds, with its Islamic and Christian sanctities, is the core of the conflict that has existed for more than 70 years and is the symbol of this conflict,” he added. He further uncovered that Hezbollah has chosen Maroun Al-Ras to commemorate Al-Quds Day this year for two symbols: proximity to Palestine and the spirit of challenge.

On the occasion, His Eminence viewed that “Al-Quds International Day is becoming more present despite the efforts of the enemies to cancel this day and besiege it.” “The issue of Al-Quds is strongly present in the conscience of the people,” he added, noting that “the new Palestinian generation is no more afraid of “Israeli” bullets at all, and is pressing ahead with anti-occupation protest rallies.” Moreover, Sayyed Nasrallah stressed that Al-Quds cause is present and alive in the minds and hearts of the nation’s sons and across the world and this is one of the strength points.

In addition, the Resistance Leader underscored that “Al-Quds today faces three challenges, the first of which is that the countries of the world will not recognize or surrender to the American decision.”

“The 2nd challenge that Al-Quds faces is the demographic change, the challenge in the change of the population structure and identity of the Holy City,” he stated, noting that “the 3rd challenge is the sanctities in Al-Quds city, especially Al-Aqsa Mosque and all that exists inside its complex.” He added that moving the US Embassy to occupied Al-Quds was just one of the many challenges they faced. In this context, His Eminence underscored that the survival of Al-Quds’ people in the city and the preservation of their homes, shops and presence in the city is the real battle.

“The Arab and Islamic countries, the Organization of Islamic Cooperation [OIC] and the Arab League are only asked to exert a little effort to prevent the rest of the world countries from recognizing Al-Quds as the “Israeli” entity’s capital,” he mentioned.

Sayyed Nasrallah went on to recognize that “the “Israeli” government has so far been unable to make a decisive change in Al-Quds, especially its Eastern side.”

As he praised the fact that hundreds of thousands of Palestinians are still living in Al-Quds, Sayyed Nasrallah elaborated that “the survival of Muslims and Christians in Al-Quds prevents the change of its identity.” “They [Palestinians in Al-Quds] are the guards of the holy city and who protect its identity,” His Eminence said.

On this level, Sayyed Nasrallah confirmed that “Al-Quds’ people must be helped to stay in their homes and be financially assisted to live in their city without succumbing to financial and life pressures. This needs spending money.”

“Helping Al-Quds’ people with money is the first line of defense in protecting Al-Quds,” he added, pointing out that “the most dangerous thing this year is what is being circulated about the so-called “deal of the century”, which is aimed at liquidating the Palestinian cause and handing over Al-Quds and the holy sites to the usurper “Israeli” entity.”

In parallel, he cautioned that “the treacherous Arab businessmen are buying houses in Al-Quds and will later sell them to the Zionist.” Meanwhile, Sayyed Nasrallah warned that “there is falsification and distortion of the Quran’s meanings and the verses of Islam.”

“There are those who want to protect their throne through America, by recognizing “Israel” and ending the Palestinian cause,” His Eminence underscored, noting that “Every Arab country that is under US dependency prevents anyone from breathing for Al-Quds and Palestine.”

Slamming the religious authorities in some countries, particularly Saudi Arabia, Emirates and Bahrain, Hezbollah Secretary General condemned the Sultans’ preachers, who discovered after 70 years that the Zionists have a historical and religious right in Al-Quds. “This is ridiculous,” he said.

“Saudi Arabia and some Arab countries tend to arrest all those who advocate the Palestinian cause and call for anti-“Israel” demonstrations,” Sayyed Nasrallah mentioned.

He further highlighted that this year’s Al-Quds Day demonstrations were staged worldwide; and that Yemenis – irrespective of Saudi airstrikes and crippling Saudi-led naval and aerial blockade – took part in a massive rally to express their unwavering support for Palestine and its nation.

Regarding the recent pressures on Iran, Sayyed Nasrallah sent a sounding and clear message: “For all those who are betting on toppling the Islamic regime in Iran, I tell them that their bets are delusional.” “Iran would not have faced all American, “Israeli” and Gulf hostility if it had surrendered to the scheme against Palestine, or if Imam Khomeini said that Tehran has nothing to do with Palestine,” he stressed.

According to His Eminence, “The Islamic Republic of Iran has supported Palestine since the victory of the Islamic Revolution back in 1979. Iran has remained resilient throughout 39 years. It has paid a heavy price for such a stance. All those countries that hold hostilities against Iran should consider themselves as “Israel’s” allies. The Iranian people will not abandon their religion and Islamic regime.”

Regarding Syria, Sayyed Nasrallah elaborated that “Israel” was betting on the fall of President al-Assad and that it viewed the militants as an interest for it. “The vast majority of Syria’s territory has become secure and the state has restored its authority,” he clarified, sending a message to the “Israelis”:

“Acknowledge your defeat in Syria as you want to turn the battle into ousting Hezbollah and Iran from Syria.” Describing Syria as the main pivot of the anti-“Israel” resistance axis, His Eminence reiterated that Hezbollah has no project in Syria.

However, he made it clear that ” if the whole world meets to get us out of Syria, they won’t be able to do so. There is one way that the Syrian leadership asks us to do that.”

“Our fighters were deployed to Syria at the request of the Syrian government and to protect Lebanon. The fall of the incumbent Syrian administration would have been catastrophic for the anti-“Israel” resistance front… When we bring back our youth and men to Lebanon we will be happy. We will feel victorious and that the mission is done,” Sayyed Nasrallah stated.

Back to the occasion, His Eminence assured: “As we believe that Al-Quds and Palestine are a just cause, I believe that Al-Quds will return to its people and that Palestine will be liberated.” Once again, the Resistance Leader sent a message to the “Israelis”: “We do not want to kill, destroy or throw anyone into the sea. We ask you in a civilized way to return to the countries you came from. If you insist on occupation, the day of the grand war will come and it is a day in which we will all pray at Al-Quds.”

Another Zionists adventure in Gaza to face new wave of resistance 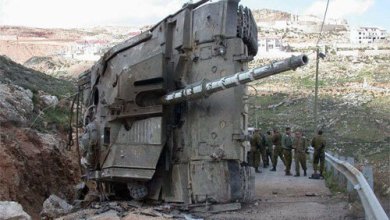