Al-Ahed News – Hezbollah Secretary General His Eminence Sayyed Hassan Nasrallah delivered on Monday a televised speech in which he tackled the formation of the new Lebanese government. 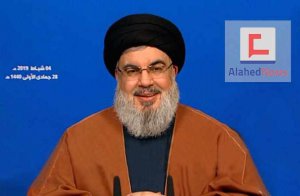 At the beginning of his speech, Sayyed Nasrallah urged all Lebanese sides to restore to calm after the formation of the government, albeit from media debates. “Let us be partners in making difficult decisions because everyone will be responsible for the outcome of those decisions, whether it succeeded or it failed,” he said, noting that “the government has significant responsibilities.”

As part of his call for calmness, His Eminence urged the political forces to recognize the concerns of some internal forces. “We, in Hezbollah, are open to dialogue in all the files and what is important is putting Lebanon’s interest in the forefront,” Sayyed Nasrallah added. In addition, he emphasized that the Lebanese cabinet decisions must be as much consensual as possible.

Regarding the economic situation Lebanon is going through, the Resistance Leader stated that “the new government is to address highly sensitive economic and financial issues that will affect the country for tens of years.”

On the same level, Sayyed Nasrallah underscored that naming the new government as that of Hezbollah is a wrong description. “Ethically, this is a lie and the right description is that this government is comprised of a group of political forces in Lebanon among them is Hezbollah.” According to His Eminence, “Israeli” PM Benjamin “Netanyahu incites the Americans, Europeans and Gulf States against the current government, calling it the government of Hezbollah.”

“Our presence in the government is more effective than ever before, through our discussions, voting and work, but this does not mean that it is Hezbollah’s government,” he added, pointing out that “ this is a of all those taking part in it.”

Commenting on the latest debate regarding the new health minister, Sayyed Nasrallah underscored that “the health minister is not a member of Hezbollah. He is a close friend and we have taken this decision for the sake of the country’s interest.”

Moreover, he went on to say: “The health minister is for all Lebanese and all regions and so is the health ministry. We expect from the Health Minister to give his absolute priority to his ministry and his presence in the hospitals.”

“What matters to us in the Ministry of Health is the issue of hospitalization, which is important to all Lebanese in addition to reducing the cost of medicine. We aim at making medicines reach people, especially to incurable diseases,” His Eminence added.

Stressing that Hezbollah that theft is impermissible under Islam, Sayyed Nasrallah assured that “The money of the Lebanese state belongs to the state and there is a legal and ethical responsibility towards this money, because the minister and the ministry are entrusted with this money.”

“We don’t want projects, business or anything and we don’t want to be accused of anything, seeing us our primal concern is humanitarian,” he confirmed, noting that the Ministry of Health’s funds will be available to the Central Inspection and the Audit Bureau. On another level, Hezbollah Secretary General stressed the importance of the alliance with the Free Patriotic Movement as part of the party’s broader alliances.

“The understanding with the Free Patriotic Movement is an important and historic step that established for a new stage and thwarted the objectives of the ‘Israeli’ aggression,” he stated, noting that “our enemies’ keenness on dismantling our alliances makes us more eager to stick to them.”

The battle before the United Europe