Mehr News Agency – Russian President Vladimir Putin said that it is necessary to do everything possible to keep the Joint Comprehensive Plan of Action (JCPOA) in force. 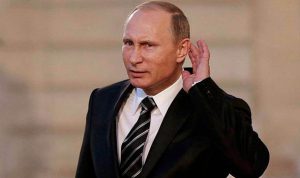 “In order to prevent a new wave of tension around the Iranian nuclear program, everything possible should be done to keep the Joint Comprehensive Plan of Action in force,” the Russian leader said at a meeting of the BRICS (Brazil, Russia, India, China and South Africa) group of countries on the sidelines of the G20 summit in Buenos Aires, Tass reported on Friday.

President Donald Trump pulled the United States out of JCPOA in May, vowing to re-impose US sanctions against the Iranian nation. Other signatories of the deal have promised to make all-out effort to safeguard Iran’s interests and keep the deal alive. One of the main steps in this regard is the Special-Purpose Vehicle (SPV) which European countries have committed to develop so as to maintain financial ties with Iran and counter the US sanctions.

Elsewhere in his remarks, Vladimir Putin said that the chemical attack carried out by terrorists on the city of Aleppo must not go unpunished. “Militants in Syria continue to attack government forces’ positions, and the attack they carried out against Aleppo city on November 24 using toxic chemicals is a blatant violation,” he added.