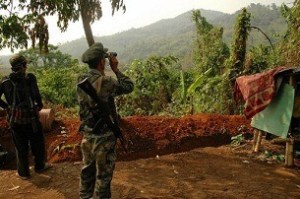 This picture taken on May 12, 2012 shows a Kachin Independence Army (KIA) soldier looking through binoculars at positions of the Myanmar army from an outpost some 12 kilometers south of Laiza, a KIA-controlled stronghold in Myanmar’s northern Kachin state on the border with China. Ethnic rebels from the Kachin Independence Army have battled the Myanmar army for a year in a conflict that has displaced around 50,000 civilians and cast a shadow over government reforms. Fighting appears to have worsened in recent weeks — despite a revamped peace talk team — and the insurgents say they are ready to defend their remote northern stronghold of Laiza. MYANMAR OUT AFP PHOTO/Patrick BODENHAM