Hezbollah Secretary General His Eminence Sayyed Hassan Nasrallah delivered on Friday a speech in which he tackled various topics, on top of which is the resignation of Lebanese Prime Minister Saad Hariri. 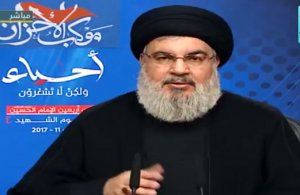 Addressing thousands of people who gathered to commemorate both Arbaeen of Imam Huseein [PBUH] and Hezbollah’s Martyr Day, Sayyed Nasrallah stressed that “we meet today to commemorate the Day the Emir of Self-Scarifying martyrs , Ahmad Qasir, ruined the center of “Israeli” ruler in Lebanon.” In parallel, His Eminence viewed that Millions march in grief and love towards Imam Hussein [PBUH]

“The official numbers talk of 20M pilgrims that flocked into Karbala in Arbaeen Imam Hussein,” he said, noting that “from Iran, there is around 2 million pilgrims.” Sayyed Nasrallah further mentioned: “If we want to search for honesty, love and passion we will see that the greatest scene emerges in Karbala. On the road to Hussein, a huge number of your sons sacrificed themselves as martyrs.” According to Sayyed Nasrallah: “With the blesses of martyrs, injured and prisoners and their families; Hezbollah was able to free the land and prisoners in 2000.”

He went on to say: “We also managed to fail all the “Israeli” schemes that the apartheid entity launched during 1982 invasion. In 2017, we were able to liberate our detained [fighters] and create a deterrent force that is able to protect our country from “Israeli” greed and from the conspiracy that has been set for the region.” In addition, His Eminence confirmed that “Daesh [the Arabic Acronym for the terrorist “ISIS”/ “ISIL” group] is in its last latest phase after the meeting of Iraqi and Syrian and allies in AlbuKamal.”

Once again, he reiterated that “Daesh was created by [US President Barack] Obama, [former Secretary of State Hillary] Clinton, the US administration and Saudi Arabia.” However, the Resistance Leader assured that “Lebanon managed to end Daesh on its land and now it is in the final stages in Syria. But it is our responsibility to protect and preserve this achievement.”

Commenting on the recent crisis that hit Lebanon, resembled by the resignation of Prime Minister Saad Hariri from Riyadh, Sayyed Nasrallah highlighted that “since last Saturday, Lebanon was set in an important political crisis that might be dangerous according to how the Lebanese act.”

“Threats emerged from here and there, so what is the situation?” he asked. Meanwhile, Sayyed Nasrallah highlighted that “since a year, Lebanon has entered a period of political stability. A president was elected, premiere was appointed and a government was formed.”

According to His Eminence, “In the past year, the work of parliament was activated, date for elections was set, a budget was endorsed after 12 years, security and judicial appointments were made and there existed a political cohesion despite differences.” “The positive scene in Lebanon is due to the cooperation of all the political forces and the concessions made by everyone,” he said, pointing out that “This was culminated by liberating the Lebanese outskirts from Daesh.”

Moreover, Sayyed Nasrallah stated that “the Lebanese situation and security have been better than that in the US.” “The security situation in Lebanon was unmatched in the region and the world and the Lebanese were living a state of tranquility prior to the latest developments.”

Back to the day of resignation, he recalled: “Surprisingly with one blow, Saudi Arabia called our PM to come to Saudi Arabia. Hariri was forced to resign and read the statement that the Saudis wrote.” As he clearly revealed that “Hariri is being held in Saudi Arabia and is not allowed to return to Lebanon.He is under house arrest.”

According to the Resistance Leader, “this is an unprecedented public interference in Lebanon to force the prime minister to resign. This isn’t just to remove him from his post but from also from all his political role in Lebanon.”

“Saudi Arabia is inciting the countries of the world to impose sanctions on Lebanon,” Sayyed Nasrallah unveiled, adding that “the Saudis are inciting the Gulf states to withdraw their nationals from Lebanon. They’re trying to turn the Lebanese against each other, this is the aim of all the current rhetoric .”

“The Lebanese PM is detained in Saudi Arabia and must be released and the Lebanese must work to bring him back,” he emphasized. On the same level, he uncovered that “Saudi Arabia has asked “Israel” to strike Lebanon and presented to provide millions of dollars for this goal.”

Sayyed Nasrallah went on to say: “I’m not talking about analysis and speculation, even the “Israeli” media unveiled that the 2006 war was held based on Saudi Arabian incitement. The Saudi wanted the “Israeli” to continue with the war so that they could eliminate the resistance.”

“Saudi Arabia has declared war on Lebanon and not just on Hezbollah,” he warned. As his Eminence condemned the Saudi arrogance in dealing with Lebanon, Sayyed Nasrallah affirmed that “they don’t have the right to act as such.”

“We in Hezbollah consider that the Saudi insult to the Lebanese prime minister is an insult to every Lebanese even if we disagree in politics,” he added, pointing out that “Hezbollah considers Hariri’s resignation as illegal, unconstitutional and void. Thus, the government is still serving. Therefore, the current cabinet is legal and effective and we do not conduct affairs without our PM. We will not conduct consultation on parliamentary elections without him.” To the Lebanese, Hezbollah Secretary General sent a clear message: “We, in the midst of this bitter war, must stand with each other and overcome differences.”

Hailing the efforts of President Michel Aoun to end the crisis, Sayyed Nasrallah urged all Lebanese to stand with his wise administration because he has been able to miss the conspiracy and maintain stability. “The Saudi is inviting you to topple Lebanon and eliminate it under the slogan of a war on Hezbollah,” he said, asserting that the Lebanese will continue with their communication.”

In this context, he told the Lebanese: “Our unity is the guarantee for stability. We should sense our belonging to this country.” To the “Israelis”, Sayyed Nasrallah sent a sounding threat: “I warn “Israel” against any miscalculation as Hezbollah is stronger today.” “Are the “Israeli” calculations today telling them to head to war? I don’t think so. The “Israeli” know very well that everything I said regarding war is a fact, not a psychological war.”

On a related context, Sayyed Nasrallah viewed that “the “#Israeli” enhanced al-Nusra Front terrorists’ attack on Hadar city in Syria’s Quneitra in the context of stirring seditions. Back to the crisis with Saudi Arabia, he stressed that there exists a great Saudi anger against Hezbollah.

“Their real anger is against Iran and that is due to their failure in Syria and Iraq. Everyone knows who brought Daesh to those areas,” His Eminence stressed, pointing that he can and must understand their wrath. “However, we can’t understand their reactions.” Moreover, His Eminence confirmed that “the Saudis had dreams in Syria and Iraq that went away as Daesh is being defeated.”

Listing the Saudi failures in the region, Sayyed Nasrallah mentioned: “They had hopes in Syria. They sought to change the map of the region. In Iraq, we all know who brought Daesh there, but they failed to bring down the state in Iraq. And we all know that they supported a separate state in Kurdistan. Even in Yemen, they failed.”

“It is the UN and not Hezbollah that has put Saudi-Arabia on its blacklist of killing children,” he added, noting that “the Saudis blame Iran and Hezbollah for their defeat in Yemen because they underestimate the Yemenis’ capabilities.”

According to the Resistance Leader, “The Yemenis are making their rockets and drones,” refuting claims that “the ballistic missile that was launched from Yemen to King Khaled’s Airport in Riyadh is launched by Hezbollah from Yemen.”

On the Bahraini situation, Sayyed Nasrallah told the Saudis: “In Bahrain, you prevented the demonstrations and imposed house arrest on Sheikh Isa-Qassem. You also killed and prisoned the Bahraini youth. What was the result? Bahrain’s economic situation is at a point of bankruptcy.” Back to Lebanon, he underscored that both Saudi Arabia and Iran have influence in Lebanon.

Meanwhile, he mentioned: “Saudi Arabia isn’t able to confront Iran so it moved towards Lebanon.” “If the objective is to subjugate Lebanon, it is mistaken, and it will fail the same as it failed in all arena,” Sayyed Nasrallah assured. To Saudi Arabia, the Resistance Leader sent the following advice: “Do not put the goal of eliminating Hezbollah in Lebanon because if you came with the whole world and incited “Israel” to launch a war, you won’t be able to do so.”

“Saudi Arabia can’t eliminate Hezbollah and this is a definite thing. Let’s be realistic …you need to lower your expectations. Talk about punishing Hezbollah. That’s more realistic. Right now their threats are hot air. If they need a game plan, I’ll tell you how you can actually affect us.”

His Eminence further wondered: “Do you [the Saudis] save the Lebanese people by intimidating them and by inciting “Israel” to wage war on Lebanon? Or are you trying to save the Lebanese people the same way you are [trying to save the Yemenis]?” Citing Cholera, famine, death, massacres, targeting of schools and humanitarian facilities, Sayyed Nasrallah asked the Saudis: “Is this how are you saving Yemen?”

“If Saudi wants to punish Hezbollah for whatever reason they can do it without implicating all of Lebanon and making the population suffer. Do you save the Lebanese people by insulting the prime minister, his political movement and his sect? Do you save Lebanon by causing panic among the people?”