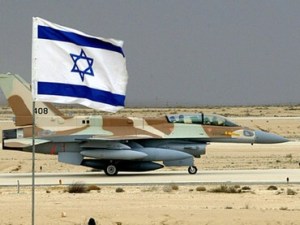 One of two US-made F-16I fighter jets makes its way on the tarmac 19 February 2004 after it landed at the southjern Israeli Ramon air base. Israel received the first two of more than 100 of the jets, which will soon make up the backbone of the Jewish state’s fleet. Experts say the ultra-sophisticated development of the battle-tested F16 Fighting Falcon, to be named Sufa (storm in Hebrew), sports a much-increased range of 1,500 kilometres (around 930 miles), allowing them to reach anywhere in the Middle East without needing in-flight refuelling. AFP PHOTO/Yoav LEMMER