Iran – On December 31, 1977, the U.S. President of the time visited Tehran wherein he delivered a speech about Mohammad Reza Pahlavi, praising him lavishly and falsely. In that speech, he called Iran the ‘Island of Stability’. What does that mean? It means that the U.S. felt assured about Iran – dependent Iran and its servile officials. It means that the U.S. felt at ease because of that stability. 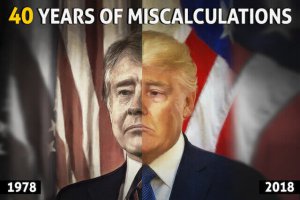 This happened on the 10th of Dey [December 31]. However, in less than 10 days, the uprising of Qom unfolded. The people of Qom launched an uprising on January 9, 1978. They moved forward and entered the arena sacrificing their lives in order to stand up against that oppressive, dependent and corrupt regime. This is how the calculation apparatus of the US and the west malfunctioned. Western and U.S. authorities brag about their calculation and analytical power. They are proud of their perceptiveness. In our country too, some westernized individuals boast about the calculation power of the US. They highlight U.S. officials’ comments and opinions: for example, they highlight what some American scientist and such and such an American research center says. They reflect on the Americans’ portrayal of the future and their worldview. However, this [failure] reflects the truth about the calculation power of the US.

They said that Iran is an ‘island of stability’, but in less than ten days, it became clear what “island of stability” meant. Qom launched an uprising and later so did Tabriz. After that, a great movement began and what followed was the tremendous storm of the Islamic Revolution and the destruction of the dependent taghuti [tyrannical] Pahlavi regime [Audience chant “Down with the US” and the Supreme Leader says, “Please show patience. Of course, you are right: ‘Down with the US’”]. This calculation power [please listen] and capability has been like this until today.

Just recently, in meeting with a gathering of thugs and terrorists in a neighboring country, one of the US politicians said that he hopes and wishes to celebrate this year’s Christmas in Tehran. Christmas celebration was a few days ago. This is how their calculation power fails. They are the same people. Their calculations dictate that they entertain such hopes, like the one that Saddam Hossein entertained – he hoped to occupy Iran in the course of one week – and like the one that their other mercenaries entertained. They, too, hoped that they would make it from Kermanshah to Tehran in the space of three days. These are their calculations! This is [how] the enemy’s calculation power [fails].

Some US politicians pretend to be mad. Of course, I do not agree with this, but they are truly first-class idiots.

You cannot put lipstick on a pig and make it pretty