Afghanistan will again be the site for one of the most complex stages of global politics in the near future. With the unexpected fall of cities and the Afghan government at the same time, the political Taliban, the military Taliban and the religious Taliban have now become the rulers of Afghanistan with different approaches. While the U.S. predicted that the Taliban would have 90 days to take full control of Afghanistan, the ousting of Afghan President Ashraf Ghani, which led to the collapse of the Afghan army, took place sooner than expected.

The flag of the Taliban Islamic Emirate over the Afghan Presidential Palace in Kabul replaced the Afghan National Flag. After occupying Afghanistan, the Taliban refused to fulfill their 90-day commitment on the US troops withdrawal from Afghanistan.

But what is important is the behind-the-scenes agreements reached by the United States with the Taliban that allow the Afghan people, especially the women and girls of this country, who have entered the social arena after centuries and their activities in all scientific and cultural fields had begun and concluded, must go back many years and even centuries according to the laws of Sharia.

What will remain as a memory in the minds and history of Afghanistan from now on is that the people of this country, despite all the suffering they endured in the crimes of the Taliban, hoped that with their progress they would preserve the civil society and the rule of Afghanistan.

The hopes of compromising with the Taliban were dashed, leaving only the painful question of how the Taliban reached Kabul without a fight and how the 350,000-strong Afghan army trained with some 167 combat helicopters and full armored equipment versus a few thousand barefoot Taliban, riding a motorcycle, occupied a country with all the hopes of its people for the future. In the eyes of the Afghan people, the United States gave the country to them in agreement with the Taliban and betrayed Afghanistan.

Washington’s only position on justifying their actions in the fall of Afghanistan is to say why the United States should fight for them when they were unwilling to fight. But Biden did not mention that the quick agreement with the Taliban had deprived the Afghan people of any opportunity for war.

From the Afghan people’s point of view, the answer to this historical betrayal can be found, at least internally, in the mysterious triangle of Hamid Karzai, Zalmay Khalilzad and Ashraf Ghani, who sought to restore Afghanistan’s absolute sovereignty to the Pashtuns. The frustrated and defeated people of Afghanistan still remember Karzai’s speech in the Loya Jirga on November 21, 2013, when Karzai told the Taliban, “Do not be deceived and do not be satisfied with anything less than the whole of Afghanistan.” It is unlikely that the Americans will be unaware of the White House security figure in all the talks, given the cruelty of Khalilzad.

The remarks came amid rumors in those years that the three southern provinces of Afghanistan, Helmand, Zabul and Kandahar, would be handed over to the Taliban. Today, in the wake of the Taliban’s lightning advance, we are witnessing the same dissatisfaction with nothing less than the whole of Afghanistan and the failure of the people of this country in the nation-building project.

The current situation in Afghanistan shows the futility and baselessness of US efforts in its grand strategy for the Middle East and the region. The idea of democratization from above without even the slightest background to the Afghan government was the same idea of the neo-conservative American students of Irving Kristol, who sought a sacred mission behind decolonization in Islamic countries.

These decolonizations were to be accompanied by nation-building that could solve the map of the new world order after World War II, which was specifically tied to the Middle East, and the establishment of the Berber civilization, and the way to the new order. Open American.

Bush’s invasion of Afghanistan 20 years ago was supposed to eliminate the main threat to the United States by establishing a new world order and forming weak governments, but in Afghanistan, successive mistakes changed the place of the killer and the victim. At least one should hope that the United States and its allies should have learned from the defeat in Afghanistan that the era of building such governments and such divisions in the new world order is over, and that this approach is a thing of the past.
Just reviewing some sentences is enough to realize the failure of US policy in this regard.

A new order whose labor pains lasted so long that not only was her child stillborn, but also the rise of China and the multiple crises of the US leadership and even the failure of the nation-building project after twenty years of war and presence in Afghanistan at great expense. Taxes were levied on Americans who were to spend on domestic development and the improvement of social services within the United States. Showed that Afghanistan was nothing to the Americans but the first phase of the laboratory phase of deconstruction to bring about change from above and in line with their values; Which, with the wrong strategies as well as miscalculations, eventually led to a compromise with the Taliban and established a medieval rule in Afghanistan.

What stood out most was the beginning of the nineteenth-century occupation during the Bush presidency and subsequent administrations as a laboratory for the final land of the Huntington Civilizations. The laboratory phase of these adventures began in the two Islamic countries of Afghanistan and Iraq. During the occupation of Iraq and Afghanistan, George W. Bush stated that the goal of the United States is that many now recognize our ability not only to win wars but also to build democratic political institutions, a strong market-based economy, not only in the two countries but throughout the Middle East.

According to the US geopolitical and geostrategic analysis, the projects were not limited to Iraq and Afghanistan and were supposed to cover the entire Middle East and create new countries by changing borders. But nation-building from above, or in other words, nation-building by a foreign country on the wings of bomber fighters, which was supposed to unite the people of the region as a nation with the aim of establishing and rebuilding relations in the cultural, social and historical spheres, eventually led to the emergence of ISIS in Iraq and the Taliban in Afghanistan.

Even nation-building without state-building in Iraq and Afghanistan has shown that creating an army, police force, judiciary, central bank, tax collection agencies, education and treatment systems, without creating a legitimate and acceptable government is a failed attempt.

In the meantime, no matter how well-equipped the army is, how much NATO and Pentagon troops will be injected into Afghanistan, and no matter how small an election they can hold, as long as there is no belonging to a mass militia, there is no reason to stand against the Taliban. Under these circumstances, and after 20 years of war and conflict, not only were the Americans unable to form a government. They practically marked twenty years of insecurity and instability, occupation and conflict with the Taliban, who were eventually forced to flee the Afghan presidential palace behind the scenes of the Doha talks to escape the swamp they had created for themselves in Afghanistan. To surrender to the Taliban. The Taliban, which was supposed to be eradicated, is setting a red line today, even to delay the withdrawal of US troops from Kabul airport.

Eventually, after spending $ 2 trillion from American taxpayers, the United States once again left a scorched earth in the Middle East and acted on Hamid Karzai’s advice to hand over all of Afghanistan to the Pashtuns. Karzai and Ashraf Ghani are the same internal figures who were ostensibly presidents and security officials of Afghanistan but became the agent of Taliban influence deep inside the central government. It must be acknowledged that Afghanistan is no longer the Republic of Afghanistan but the Islamic Emirate of the Taliban, and all countries of the world must pay the consequences of such a government. 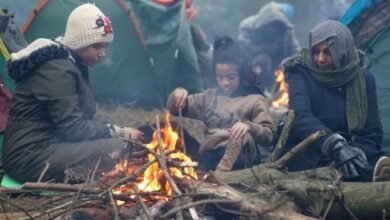